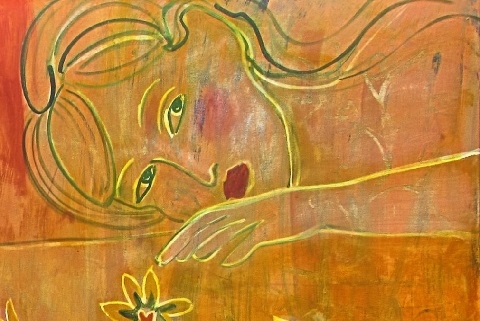 Sand gets into your shoes when you walk on the beach no matter what you do. The grains are as tiny as they can be. It is hard to imagine that once the grains of sand were a big rock. Rocks seem so stable and forever , but they turn into sand eventually. Sands of time.

It is hard to imagine timelessness. Eternity. It hurts to imagine it .

My Grandmother lived to be 101. She used to say “I worked so hard but that made me better. She had obstacles to overcome . She had a husband who refused to learn English when they came over from Hungary. Can you imagine how hard that must have been on her  and the five kids. No, the kids did not learn Hungarian.  But she did manage to create a little empire consisting of a huge garden ,five successful children,  spectacular cook and sew and knit, handmade everything.  She brought the alter flowers every Sunday to the Catholic Church. from her own garden.  Florists bought flowers from her.She grew grapes and made wine and sold it. Same for eggs and clothes. Oh and she worked full time till she was pretty old. She worked in a cannery for 20 years then worked as head cook for a well known family .

I think about her more the older I get.

The rocks of stability I had in my life. All 4 grandparents were like this. Not a slacker in the bunch . Parents that were likewise . Stable Stable Stable. I was given so much.

Was I grateful as a 20 year old??? heck no. The walk in the desert continues.